You are here: Home / Home / What Is A Solar Power Generator?

The question, “what is a solar power generator?” rings like one a naïve or completely inexperienced person would ask.

However, after blogging about portable solar power for more than a year, we came to a reality that those who have not been engaged in the field would miss: solar power generators are still relatively new and for many persons, the first they will be coming across the name is the time you actually mention it to them 🙂

This means that, without a proper, clear and encompassing definition, such persons are bound to get the very concept of solar powered generators wrong and would, at best, wind up making inexperienced guesses that will ultimately not help them understand the issue at hand or be positioned in such a manner as to one day, benefit from these awesome source of clean energy.

So, if you landed here looking for what a solar generator is, you’re on the right page. Kindly follow us down the page as we offer a super detailed and extremely simple clarification for you. 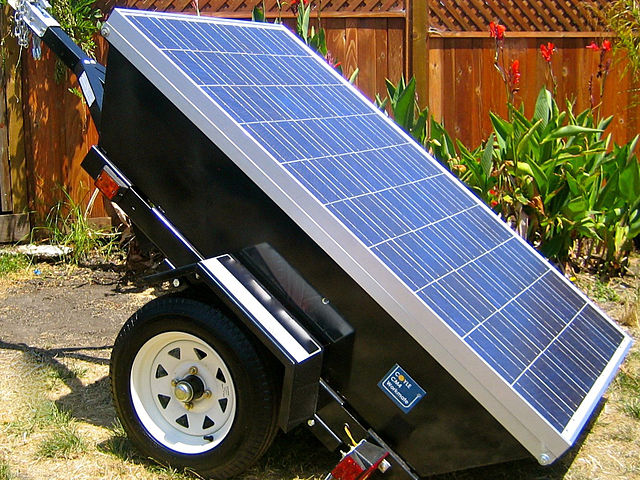 What Is A Solar Generator?

A solar generator is a power generating unit that is made up of a (storage) battery, an inverter, power sockets and most importantly, an array of solar panels.

The solar panels trap sunlight from the sun and feeds same to the unit directly, when they are exposed to direct (and sometimes, reflected) sunlight.

The DC, received from the sun via the solar panels and transmitted to the unit is stored directly via the inbuilt battery/batteries (depending on the configuration) of the solar unit in question.

The battery or batteries could be of any type of variant; however, at the moment, the most popular options remain the old lead acid battery type and the new, radical and innovative alternative, lithium-ion.

The inverter (which could be of the pure  sine wave variant or modified sine wave option) in the unit achieves the singular task of converting the stored energy in DC form to AC form that is usually accessible via the various power outlets: USB ports, traditional power sockets and other options that permits power to be pass unto plugged devices.

It is instructive to note however that, not all solar generators have an inverter. Portable options like the Kalisaya KP601 558-Watt Portable Solar Generator have no built-in inverter. Accordingly thus, they do not offer any conversion from DC to AC. Such generators, in typical fashion, can only afford to power devices that are tolerant of the DC power model or are dedicated DC appliances.

It is further important to understand that, though some solar generators (especially the portable variant), do not offer inverters that convert DC to AC, such solar generators are not common and are far between. The common and most popular models (like the Goal Zero Yeti 150 Solar Generator, Goal Zero Yeti 400 Solar Generator & the Suaoki 220Wh/20,000mAh Portable Solar Generator) all offer not just inverters that convert DC power seamlessly to its AC variant but also offer the cleanest and highest grade of AC power, the pure sine wave variant.

Closely related to solar power generators is a generator type that has come to be popular and is currently making waves and winning the hearts and souls of users. It is called, the portable solar generator.

MORE: Is Buying A Portable Solar Generator A Wise Decision?

Accordingly thus, it can be carried, usually by hand (and with ease) from place to place, especially to spots/locations where power is needed and conventional power from the grid is tricky.

The most noticeable difference between these two specs however remains the fact that the power that the portable solar generator outputs is less than what a conventional solar generator normally gives out. Accordingly thus, the gadgets/devices that the latter powers and manages brilliantly cannot be handled/accommodated by the former.

However, this simple explanation notwithstanding, let’s take a detailed look at the differences between an ordinary solar generator and a portable solar unit.

Now that you have clearly seen what these two units have to offer (by way of an open comparison), let’s now take a look at the reality of which of them best suits you or will best serve your alternative power needs.

Solar Power Generators vs Portable Solar Generators: Which is Best for You?

There are no clear cut advantages or disadvantages between these two power options – save the slight realities that will make you (or anyone else for that matter) prefer one or the other at a particular point in time.

Now, let’s take a look at the various times in your life or work when it will be smarter choosing one or the other:

When It Is Best To Go With A Traditional Solar Generator?

If you’re contemplating going with a traditional solar generator, you should continue if:

Now, let’s take a look at when you should take a considered look at a portable solar generator as an option:

When It Is Best To Go With A Portable Solar Generator?

Now that we’ve explained which generator type to get (with full detail, depending on the circumstances or fix 🙂 you find yourself in), its now time to offer a quick summary and conclude this awesome article of ours.

It is thus our sincere belief that you are now acquainted with all the knowledge that you require to make headway.

However, if you’re still not sure whether you should consider solar generators further, this article will certainly be of help: 9 reasons why you need a solar generator.