You are here: Home / Home / Is PowerOak The Same As Suaoki?

Recently, we received a simple email that read: “Is PowerOak The Same As Suaoki?“

Initially, we were taken aback: why would anyone confuse two clearly distinct portable solar generator companies/brands?

However, when we discussed the question at our morning briefing, one of our staff writers pointed out the confusion may be as a result of the similar 400Wh solar energy generator both companies field – and market.

We took a closer look at what we saw and after due research, got ourselves cleared and finally, we satisfactorily put the question to a logical rest.

Today, we’ll present to you our answer.

Article at a Glance

Is PowerOak The Same As Suaoki? The 400Wh Solar Generator Controversy

In a short simple manner of answer, they are the same solar generators!

However, (you wonder), how can the two solar generators be the same when they are made by completely different companies?

PowerOak is a distinct company from Suaoki.

However, the two companies are right into the business of portable solar power – targeting consumers who are either in love with hiking or camping or just desire the assurance of portable solar backup – when the mains pack up. 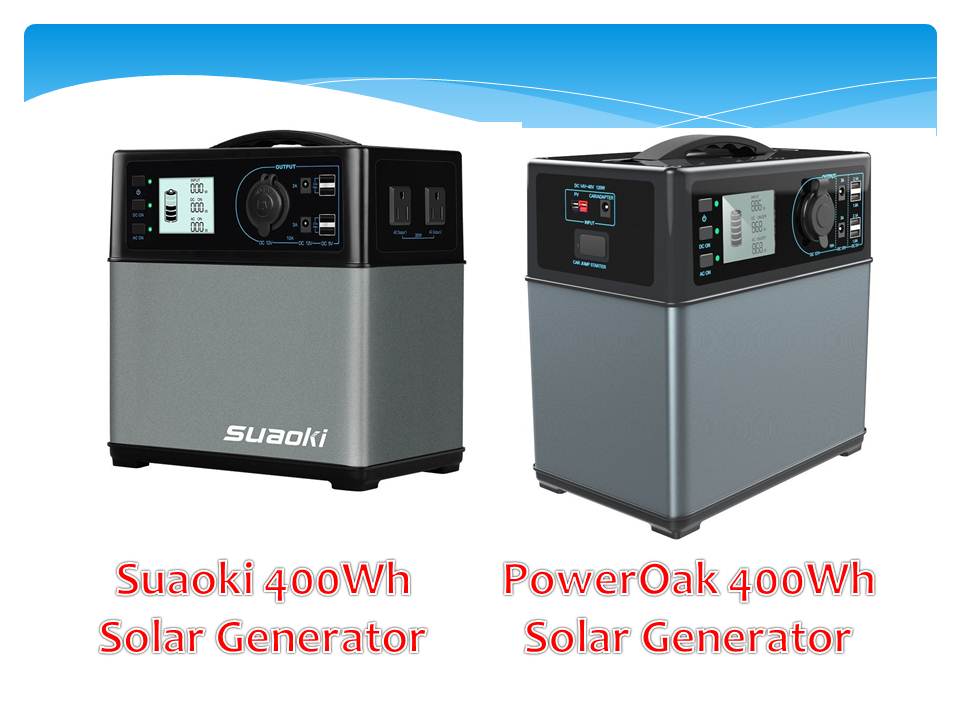 However, it is important to explain why the two different and (otherwise very) distinct companies are now in the business of marketing exactly the same product – under different brand names.

Under this manner of manufacture, a company produces products that it does not label – leaving the labeling to be carried out by the party that subsequently buys and desires to market the product as its own.

In the scenario under consideration thus, the original manufacturer of the 400Wh portable solar generator is neither Suaoki nor is it PowerOak 🙂

The two companies simply contacted an unknown original manufacturer in China (or elsewhere) and instructed it to brand the generator as desired.

Or, the companies simply imported the generators ‘blank’ – and without any name and branded it themselves.

However, a careful look will indicate that whereas Suaoki took out time to brand its own stock – or ordered it to be branded by the original manufacturer, PowerOak did not bother about any of such fancy packaging/marketing, hence the completely blank generator without a ‘label’ or a ‘name’ from their stables.

If you’re a visual person, the embedded video will help clear up somethings that only a video can achieve.

Pictorially, both solar generators can easily be seen to be one and the same thing.

Wrapping Up The Suaoki-PowerOak Confusion

Now, you know exactly what it is that differentiates these two brands of portable solar power generators: their names or lack thereof 🙂

You also know that, these two models are essentially the same OEM product offering from different competing companies.

As wrap up, if you’re considering purchasing either the 400Wh portable solar generator from any of the companies, go ahead: the generator is an awesome one – and one of the very best in its segment. Personally, we heavily recommend it.

However, if you have to choose between companies, it should be based on price point, shipping time, product availability, warranty or any other index apart from the product itself.

Do have a solarful day 🙂