Goal Zero is clearly the undisputed market when it comes to portable solar power.

However, if you’re not interested in the Goal Zero’s Yeti product line and would rather have another (reliable) brand, what are your options?

Without much ado, let’s take a look at these Goal Zero Yeti alternatives that are very capable of awesomely serving your solar portable power energy needs. 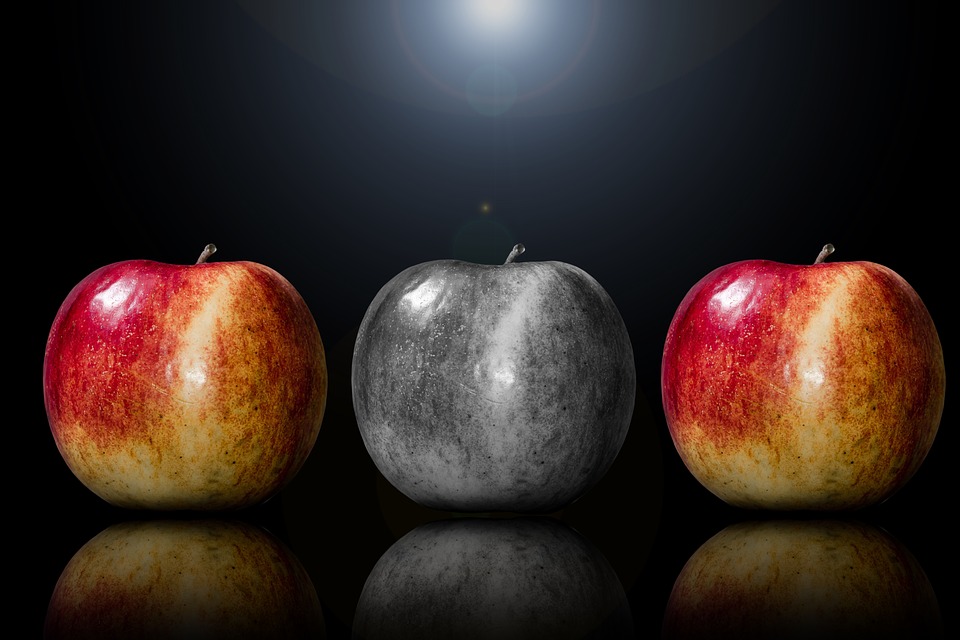 The options shared here are as good as the Goal Zero Yeti series of portable solar generators.

However, in some instances, some of the generators offers functions that you cannot simply find with/on a Yeti model.

In such an instance, it is right to hold that such a power generator is a better option to the corresponding Goal Zero option that you would have otherwise purchased.

However, be mindful of the fact that we’re not condemning or calling any brand superior – or inferior: we’re simply taking a practical look at the basics, options and importantly, specs and drawing (intelligent) professional conclusions in the process.

Now that the air has been cleared, let’s take a look at the very first option 🙂

The very first option on our list of super viable alternatives to the Yeti offer from Goal Zero is the Kalisaya KP 601 Portable Solar Generator.

Currently the weight-energy ratio of this portable solar generator is the best in the market!

What this means is quite simple: the KP 601 is the lightest portable solar generator outputting that much power – for its weight point.

When you confirm that the battery is an awesome lithium-ion 38Ah battery, churning out an impressive 558Wh of power and the generator itself weighs only 14 pounds, you’ll have no other option than to agree with us 🙂 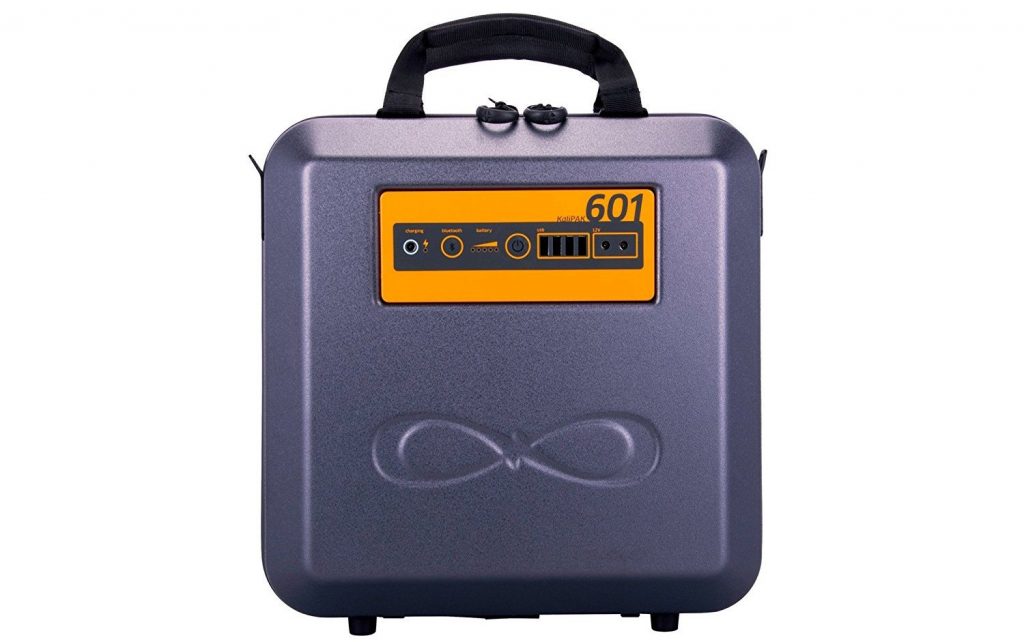 It is worth noting that the Kalisaya KP 601 can comfortably serve as an alternative to the Goal Zero Yeti 400 – and all other lower rate portable solar generators from the stables of Goal Zero under the Yeti series.

Further, it is important to note that the KP 601 has an optional accessory, a raincoat that makes it a water proof solar generator –  a reality the Yeti series cannot yet boast of.

Further, the KP 601 remains the only portable solar generator today that can comfortably be operated and managed by either an Android or iOS app – another fact/reality that is still not available when you opt to go with the Yeti line.

The KP 601 can comfortably power laptops, tablets, digital cameras, cellphones, tablets, camcorders and other light gear/tech that will need charging especially on the go.

Accordingly, it remains one of the most loved and respected solar generators, especially for campers and hikers.

However, if your budget cannot afford the generator at the moment, you could very well consider either the KP 401 or the KP 201 – all from the same parent but with varying power, ability and importantly, budget point.

MORE: Better Than Goal Zero Yeti: Are There Such Solar Generators?

No Goal Zero Yeti solar generator can (yet) boast of sporting an aluminium shell design and car battery jump-starting ability.

Fortunately, these are the primary features – and greatest selling points of the Suaoki 400Wh 120,000mAh Lithium-Ion Portable Solar Generator.

This 400Wh beast can favorably match the power of the Yeti 400 generator and all other offerings from the stables of Goal Zero below that point.

In terms of power – and the reality of powering things up, this power station can power a laptop, cellphones, tablets, camcorders and an array of other light devices that are in the medium power consumption category/range. 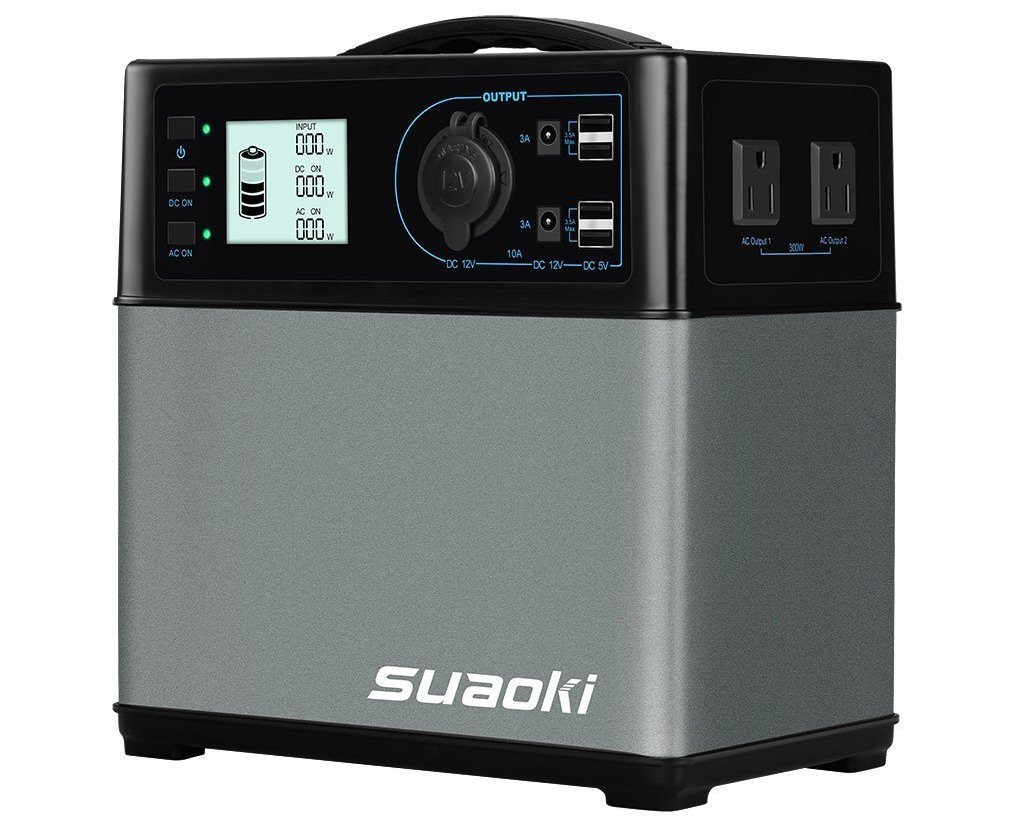 However, it must be noted that the Suaoki 400Wh solar generator is essentially the same thing with the similarly priced 400Wh portable generator from PowerOak.

If you’re interested in any of the units, it will be a wise decision to simply pick up anyone you desire without bothering with either  their brand names or the fact that one is offered by company ‘X’ or  another by company ‘Y’.

Further, it is very important to note that should your auto tranny car battery run down when you’re enjoying your holiday – or when you’re out on a picnic, this solar generator can do an awesome job jump-starting it – a reality the Yeti series are still very useless at 🙂

If you’ve ever wondered if Goal Zero is the only company today that makes really beautiful and smart portable solar generators, think again – or better still, wait till you see the super beautiful and extremely practical, Ascent Solar Generator Y1200.

Designed to primarily tackle (and serve as a viable alternative) to the Yeti 1250 and the Yeti 1400 lithium, the Ascent Y1200 does this job in a super awesome manner and as a matter of fact, leaves many completely uninterested in the Goal Zero reality they were hitherto hooked to.

This could be your reality too – if you switch, intelligently. 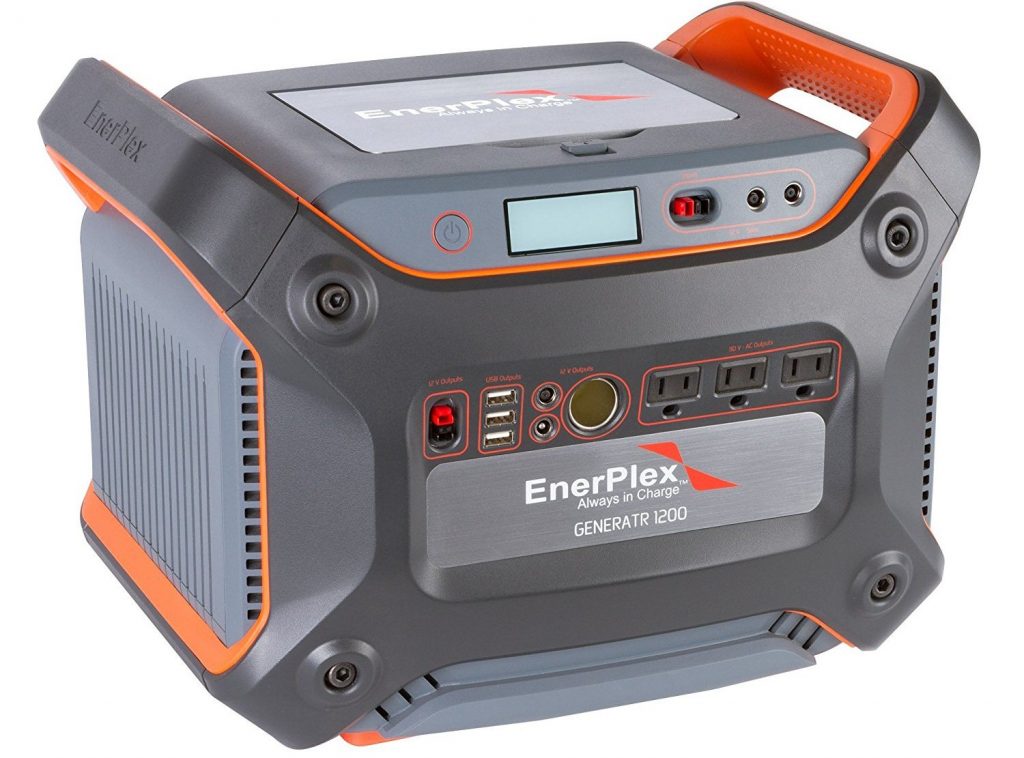 The Ascent Y1200 powers refrigerators, power boring drills/equipments, TVs – and all other smaller equipments,  thanks to an 1231Wh of power that the generator spits out.

So, if your power needs are on the extreme spectrum but you still appreciate the convenience that comes with portable solar power solutions or would love a stylish and powerful solution that is not made by Goal Zero, the Ascent Y1200 is what you should be taking an interested look at.

And, we almost forgot: the Y1200 weighs only an impressive 42lbs for all that power, style and capability!

However, if you’ll looking at an option to serve in stead of the Yeti 150, this is one of the most practical alternatives. 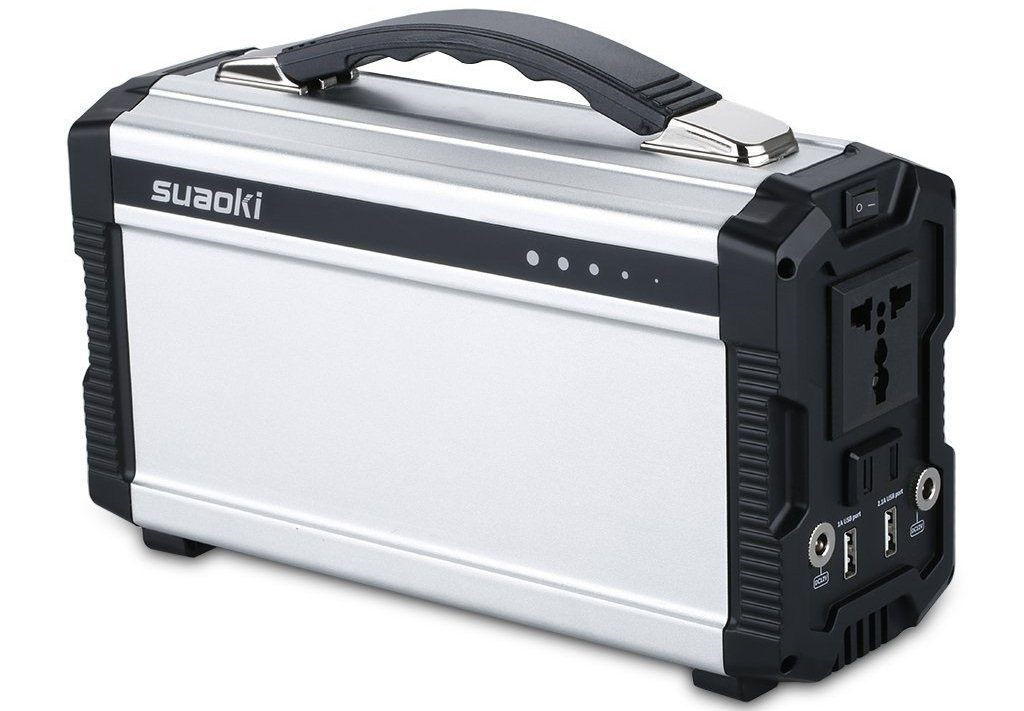 The only challenge of this generator is that, it cannot power loads that are in the medium-heavy category.

Accordingly thus, you should only consider this generator when you’re looking to power cellphones, tablets and other light gadgets only.

Another smart advantage: because of its low power and capacity, the price of the generator is also very affordable and can be bought by anyone who wishes to test his/her feet with solar or is interested in powering only the basics.

Like both the Yeti 150 (which it serves as an alternative to) and the Suaoki 220Wh generator immediately above, this generator is meant for light load – and can power electronics and gadgets with ease – provided they do not exceed 1000w. 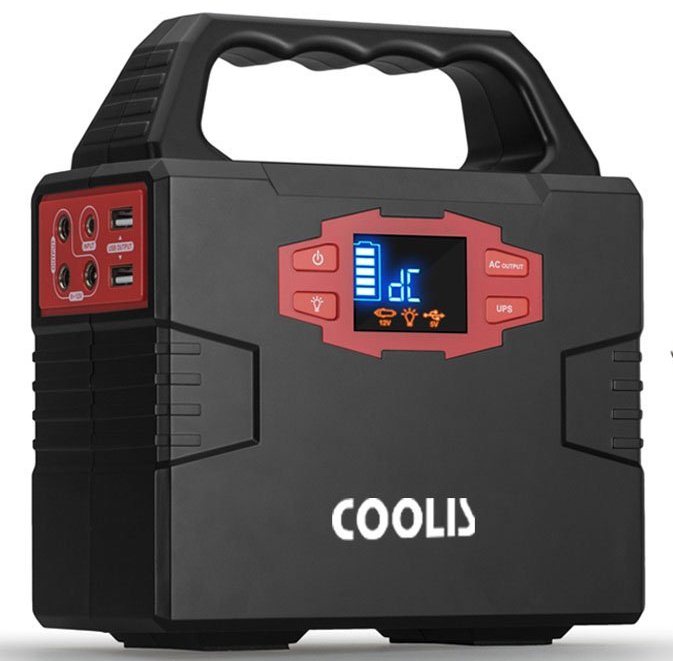 The good thing about the Coolis 150Wh PSG is that, it can be recharged variously.

For users who prefer the wall option, there’s an AC cord to tap current directly from a traditional wall socket.

For users who will rather use the cigarette lighter port of their cars, they can also go ahead – with the provided, dedicated cord.

Finally, for the solar heads that simply cannot resist the outdoors and prefer their energy source as clean as can be, the solar recharge option graces the generator majestically.

It is also worth noting that  users who bought this generator gave it impressive ratings and on the whole, are very impressed with their solar generator.

So far, we’ve not yet mentioned any Yeti alternative that is modeled in the briefcase fashion – the Renogy Phoenix Portable Solar Generator is thus the very first.

However, this unit is a beast – and not anything remotely close to a Goal Zero unit in terms of ruggedness.

The unit is tested to meet military standards and is famously waterproof.

This means that, for users who are interested in Goal Zero but are not appreciative of its plastic finishings that aren’t waterproof, this Renogy beast will be a very welcomed development – and awesome improvement. 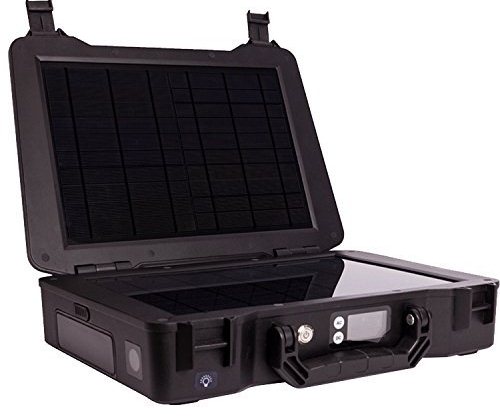 The most impressive thing about this Renogy model is its legendary portability – and ease of carriage: it is simply folded as a briefcase would be and carried in the most smartest of manners.

It is also important to note however that, this solar generator is an awesome alternative to the Yeti 150 and 400 – its load being largely restricted to a laptop and below.

Our 7th Goal Zero Yeti alternative is the Aspect Solar Sunsocket Sun-Tracking Solar Generator which sports many features that Goal Zero hasn’t began experimenting with yet.

This generator serves as an alternative either to the Yeti 150 or the Yeti 400 – that is the model it was manufactured to tackle on a competitive basis.

However, it is worthy of note that the safe load extent of this generator is also from the laptop down to way lighter and minor loads.

If you’re interested in running higher/heavier loads, you may need to look to other alternatives that are manufactured with such loads in mind.

It is also important to remind you that despite the advancement of the technology this portable solar power station deploy, it is still surprisingly simply and is designed in a very practical and usable manner.

For instance, the generator weighs only a light – and insignificant 25 pounds, while its USB ports are designed to be used even when night comes and the panels are folded into their case for storage or when one is travelling and opening the panels up is not an option.

Wouldn’t you rather check it out?

Don’t get it twisted: the Yeti series is still one of the most impressive lines of portable solar generators today.

However, there are some users who do not have access to the generators from this company or would prefer another brand for varying reasons – such as the ability to jumpstart a battery or the reality of waterproof solutions, which Goal Zero hasn’t started rolling out yet.

It is for such readers that this post was thought out and published today.