You are here: Home / Home / Goal Zero Lithium Solar Generators: Why You Should Buy One

Solar generators are all over the place and their lithium-ion equivalent is an extremely sweet icing on the cake.

But, why should you care about these portable solar power units or the lithium powered power stations readily available today from the stables of Goal Zero?

The reasons are many – and will be treated in detail in this entry.

But first, a little about the company that we’re discussing its product at the moment: who/what is Goal Zero and what exactly does the company stand for?

Goal Zero as it is known today was started in far away Congo, Africa, by Robert Workman as a response to the dire need and poverty he saw and experienced first hand in the DRC.

The primary idea behind the startup was to give businesses a boost, productively while still ensuring that citizens lifted themselves out of the excruciating poverty common in Congo to both a fulfilling and inspiring life.

Aside aiding the poor to boost their economic reality while leaving less footprint, the company also had it as its mandate to ensure that the wealthy and super rich also find use for its products by engaging in pastimes and fun activities that will certainly ensure a richer and more meaningful life for them.

From Workman’s initial dreams and hopes for the company right through its acquisition by NRG Energy in 2014, the company remained true to its vision, expanding its initial scope to assist plaque and disaster stricken communities and importantly, aiding those who most needed power to achieve what reality they dreamt possible with steady and reliable clean energy.

Unfortunately, Goal Zero did not take the penetration of the lithium-ion market serious neither did it make it as a matter of premium.

Accordingly, the company ventured into the reality way late – as late as early 2017.

However, it is clear that Goal Zero saw the wave (of lithium-ion technology) coming and instead of resisting the tides, chose to ride right on with it.

So, to answer the question, ‘why lithium’, it would be apt to ask yet another: ‘why any other battery type (aside lithium)?’

The full, detailed and comprehensive answer to this question however will be treated in a moment. As a matter of fact, it is the major inspiration for this article as a whole.

So, can we jump right on it and and take a look?

If you’ve hitherto been in doubt about the power and efficacy of lithium-ion portable solar generators or are wondering if it’s smart to actually invest your money into the models manufactured by Goal Zero, here are your answers.

The typical portable solar generators from Goal Zero deploring lithium-ion is very light – about 20kg for about a whooping and impressive 1500Wh of power.

Now, that is simply about the best energy-weight ratio one can get when it comes to solar power stations in this class.

Closely linked to the very first point above is the fact that the lithium portable solar generators from Goal Zero are also very portable, besides their fair weight.

These generators can easily be carried to wherever you need them or wherever portable power is desired, a reality which makes them ‘mobile’ in the truest sense of the word.

Usually, with mobile, comes great power – the type it is very difficult to resist.

MORE: 5 Cheapest/Inexpensive Portable Solar Generators Under $500 – And What Makes Them Awesome!

The appeal of the lithium powered portable solar stations from the stables of Goal Zero does not stop at lightness and portability only: it also extends well into power – which these generators sport easily.

Relying on the improved battery technology that they actually run, these generators offer power that can only be imagined; power that ordinarily, one would doubt they posses.

4. The Yeti Lithium Series Are Smaller In Size Overall

Generally, the Yeti lithium series from Goal Zero are smaller in size, overall.

This is made possible by the fact that lithium-ion batteries are not as bogus as their lead acid cousins.

This reality ultimately means that there is usually not much to stuff into a conventional solar generator and since the battery often accounts for more than 80% of the space of internal units/accessories, lithium models from Goal Zero can comfortably afford to be as small and as inconspicuous as can be.

This small size usually means ‘gold’ when carrying the generator around (especially in the trunk of a small car) and during storage when space is limited and very precious.

Lithium-ion batteries typically have a discharge circle that is often, more than 10 times what is obtainable when you use lead acid.

The stark implication of this is that, lithium batteries technically ‘die’ less frequently than their lead acid cousins which means, they’ll need replacement less often too.

Overall, this reality accounts for the frequent battery changes that one needs to tackle, when playing with lead acid.

The cost saving, this way, more than makes up for the extra purchase price when opting for this type of solar generator as Goal Zero offers.

You may not know this but a typical lead acid battery in a portable solar generator (or any thing else for that matter that requires a battery) does not fully discharge when in use.

This means that, instead of the battery giving you its all, it gives you just about 70% of its rated power.

To put this into perspective, a lead acid battery that is rated at 100Ah only discharges to about 70Ah before it goes limp and leak, needing another recharge itself.

This is not the same with lithium-ion, especially the brand that Goal Zero makes and sells (in its generators).

These lithium-ion batteries discharge right up to an impressive 100% and give users all its power before it needs recharging itself.

This way, users are pretty certain and absolutely sure that the rated Amperes of the battery they’re using will fully discharge according to the capacity they are expecting and actually paid for.

This could be you 🙂

It is impossible to store a traditional lead acid battery upwards of 12 months without it losing its charge.

As a matter of fact, you would be considered completely lucky if you find the battery usable again – after that much ‘neglect’.

Fortunately, with a Yeti model running on the latest lithium-ion technology, this is very well possible and as a matter of fact, very common.

Built with the latest technology, the cells in the batteries of these portable solar generators can last an entire year of ‘inactivity’ without going into a state of ‘moribund’.

If you’re a busy person who plans on using your solar generator only once every while, you’ll be impressed with the Goal Zero series and most importantly, what they have to offer in this regard.

A Word Of Caution Though

While lithium-ion batteries are great and offer for an extended enjoyment of both your life and the things you care about, you may have challenges with them if you need to fly.

According to the TSA, lithium-ion batteries (or any other batteries for that matter) big enough to power a solar generator or rated more than 100Wh are prohibited on a flight except they are used to power a wheel chair, a scooter or are designated as ‘spare’ of any of the aforementioned.

While it is hoped that this will change as the increased need for power and the safety of lithium-ion batteries are understood (better) the world over, it is important that you take adequate measures to avoid being stranded or forced to leave your beloved power source behind.

One of such options is choosing to use the ocean as a medium of travelling or deploying the open road in a badass camp friendly pick-up or SUV.

MORE: Is Buying A Portable Solar Generator A Wise Decision?

At the moment, Goal Zero has three portable solar generators that sport a lithium-ion battery: the Yeti 400 Lithium, the Yeti 1000 lithium and the Yeti 1400 Lithium.

Here’s a smart summary of these generators: 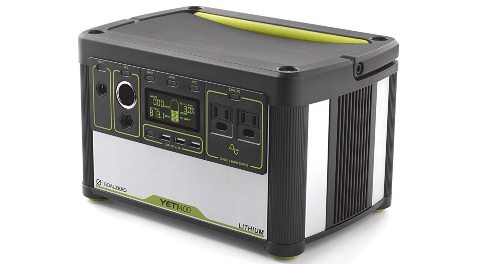 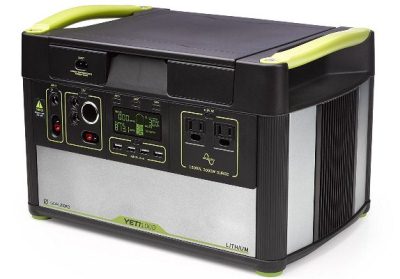 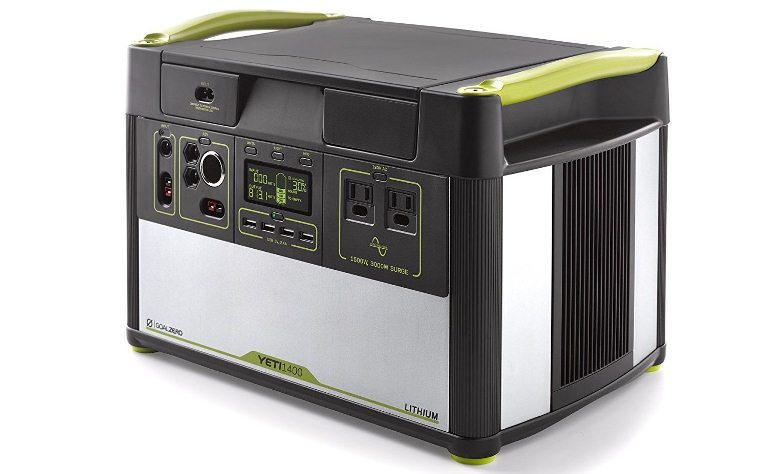 There are still some persons who are reserved about lithium-ion battery technology, especially given the earlier challenges this technology had when it first launched.

These challenges have however been resolved and the generation of lithium batteries that power such units as portable solar generators are as safe and reliable as anything can be.

It is on this note that we wholeheartedly think you should try the Goal Zero lithium options when you decide to try a portable solar generator.